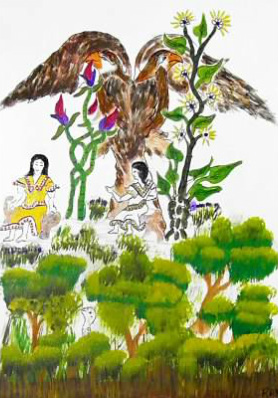 There once was a Ngäbe woman who was training to weave bags.  The bags woven by the woman were designed with patterns and colors based on the patterns and colors of the snakes that she would see passing by.  While in training she suffered a serious physical injury.  The woman was told she had to avoid the sun and follow a special diet that allowed for very little meat.  The woman stayed out of the sun but refused to obey the new diet.  In order to satisfy her desire for meat, the woman became a cannibal and began to feast on the meat of her own children.  She was soon joined in her cannibalism by her husband.  As he watched his five siblings be eaten one by one, the oldest son made a plan to save his life.  The son set a trap for his father, killed him and began to cook him.  The woman, thinking that her husband was cooking their oldest son, began to eat.  While she ate, the son left the house and lived a long life.  He would come to be known for his power and his cunning.