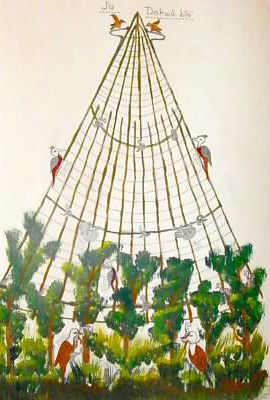 The conical house is the symbol of the universe for Ngäbe. According to tradition, the universe was constructed in this way. The creator god, most powerful of the gods, laid out the plans for the universe in the shape of a conical house.  The creator god gave the task of building the house to the lesser gods, each of which took the form of and animal.  The snake was the rope used to tie the branches together. The sloth held the roof onto columns. The job of the bellbird was to weave the rope at the peak of the structure. The woodpecker was chosen as the foreman in the construction and ensured that everything was level.  These were just some of the many animals involved in
this work. After construction was finished, there was an eight day party to inaugurate the structure.  Several gods in the form of birds sang many songs during the celebration.  The festivals and sacrifices held by the Ngäbe to honor the creator god are in remembrance of this creation story.