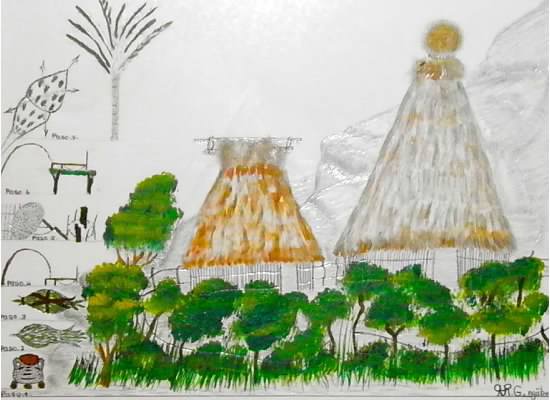 Cocoa plays a significant role in the Ngäbe society.  Traditionally sukias have controlled cocoa use.  People would come to a sukia for permission to drink cacao for a variety of reasons.  There were seven main uses for cacao.

1 - Cacao was consumed as a traditional beverage.  Cacao beans were dried and ground into an oily paste. The paste is then mixed with water and consumed either hot or at room temperature.

2- Cacao was consumed for security and protection for families and their homes.

3- Cacao was used as a ritual drink to resist and sicken evil persons.

4- Cacao was used to relieve torture from evil spirits as a person neared death.  After consuming the cacao, the sukia would kill the sick person.

5- At times wizards would turn people into small animals such as frogs or rats.  Cacao would be used to lure these small animals into traps where they would be crushed by large rocks, freeing the souls to return to their human form.

6- Cacao would be used to lure evil spirits of the air into traps.  These spirits were found in the dark and took the form of moths, bats, and birds of the night.

7- In the most extreme cases, one could combine any of the above uses of cacao  for more power.