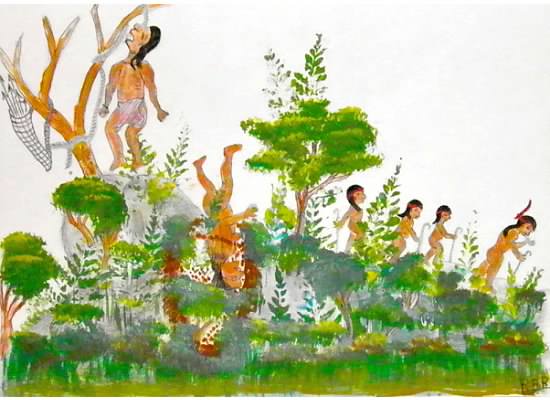 For generations Ngäbe men would enter the jungle and practice a ritual known as Bube. The ritual was in worship of Tulivieja, the invisible spirit of the jungle.  This ritual was to be practiced only by men and every man who took part in the ritual was forbidden to reveal the secrets of Bube to the women.  One day a young man was convinced by his partner to tell her about Bube. He not only told her the secrets but also brought her to the ritual to watch in hiding.  The older men discovered the young couple and as
punishment for revealing the secrets of Bube to a woman, the young man was hung and the young woman was killed and thrown into a pit.  Their bodies were left as a warning to others who might reveal the secrets.