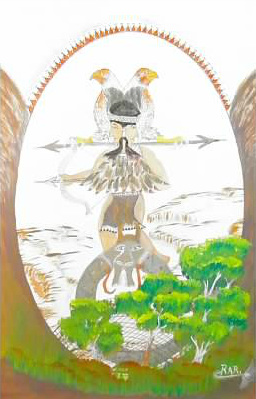 Jirónde was a great warrior and prophet born around the year 1420. His parents were from the villages of Dairabo and Muhtruhnambo.  History says that he was born with two faces- one on the front of his head, one on the back.  The double faces allowed him to see both forward and backward at the same time.  This prevented any enemies from sneaking up on him.  Over the years his fame as a warrior grew but this reputation was soon surpassed by his reputation as a prophet.  It is said that he predicted the arrival of the Spanish, the discrimination the Ngäbe would face because of it, and the damage that it would cause their society.  He is also said to have predicted many
other future events.