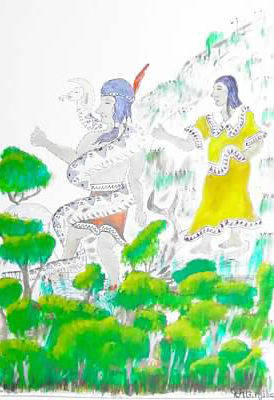 For a certain young man, the highlight of his day was when a beautiful young woman would pass by his house.  The woman would pass dressed in bright colors meant to catch his eye. He soon fell in love with the woman and they made plans to meet in private by a waterfall in the jungle.  At the appointed time, the man went into the jungle but he could not find the young woman.  What he did find was a large snake.  After a closer look, the man realized that the snake was the woman in her true form.  The fact that she was a snake did not affect his love for the woman.  The snake approached the man and wrapped him in an embrace.  Unknown to the couple, the younger brother
of the man had followed him into the jungle.  To his eyes the snake was attacking his brother.  He quickly pulled out his machete and attacked the snake.  Sadly, in his effort to kill the snake, the younger brother cut too deep and killed his brother also.